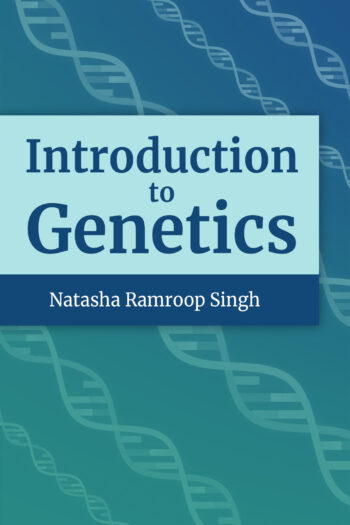 Book Description: Covering the pioneering work of Gregor Mendel, this textbook investigates the interactions between and amongst genes, and how these interactions can be used to map biochemical pathways and the order of genes on chromosomes.

Genetics, otherwise known as the Science of Heredity, is the study of biological information, and how this information is stored, replicated, transmitted and used by subsequent generations. The study of genetics can be sub-divided into three main areas: Transmission Genetics, Molecular Genetics, and Population Genetics. In this Introductory text, the focus is on Transmission or Classical Genetics, which deals with the basic principles of heredity and the mechanisms by which traits are passed from one generation to the next. The work of Gregor Mendel is central to Transmission Genetics; as such, there is a discussion about the pioneering work performed by him along with Mendel’s Laws, as they pertain to inheritance. Other aspects of Classical Genetics are covered, including the relationship between chromosomes and heredity, the arrangement of genes on chromosomes, and the physical mapping of genes.

The first edition of this textbook, called OPEN GENETICS, was produced in January, 2009 as instructional material for students in Biology 207 at the University of Alberta, and was released to the public for non-commercial use under the Creative Commons License (See below). Users were encouraged to make modifications and improvements to the book. All the text in the original 2009 edition was written by Michael Deyholos, Ph.D. In subsequent editions (2010-2014), additional chapters were written by Mike Harrington, Ph.D., at the University of Alberta. Additional content and editing by John Locke, Ph.D. and Mark Wolansky, M.Sc., at the University of Alberta. Photos and some diagrams were obtained from various, non-copyrighted sources, including Flickr, Wikipedia, Public Library of Science, and Wikimedia Commons.  Photo attributions are listed in the legend with each image.

OGL is an alternative approach to an open source textbook. Much of its content is derived from the OG textbook. The 13 chapters in OG were cut up and distributed into 41 shorter chapters that parallel the current lecture topics in BIOL 207 (Molecular Genetics and Heredity) at the University of Alberta. More text content, figures, and chapter-end questions were added in this revision. The most recent version of OG had ~76,000 words, while the Fall 2015 version of OGL had ~128,000 words, a 68% increase.

This reorganization of OG content into OGL was accomplished during the summer of 2015 by John Locke, Mike Harrington, Lindsay Canham, and Min Ku Kang. This project was funded in part by the Alberta Open Educational Resources (ABOER) Initiative, which is made possible through an investment from the Alberta government. Lindsay Canham was supported by a grant from the Alberta Open Education Initiative (OEI) through the University of Alberta. Min Ku Kang was supported by a Summer Student Scholarship from the Centre for Teaching and Learning (CTL), University of Alberta. Without these sources of financial aid this project would not have been possible. John Locke and Michael Harrington appreciate their help, as well as that of Michael Deyholos, who initiated this endeavor. Typographical errors, rewording, and additional questions were added in the summers of 2016, 2017, and 2018 (J. Locke, M. Harrington, and K. King-Jones).

The final version of this work is available via a DataVerse link:

This includes all the .docx files for each chapter and other relevant files. This is made available for anyone to use, adapt, or improve for educational purposes. If you have edits, improvements or additions that you wish to share under the same license terms, please contact John Locke, University of Alberta.